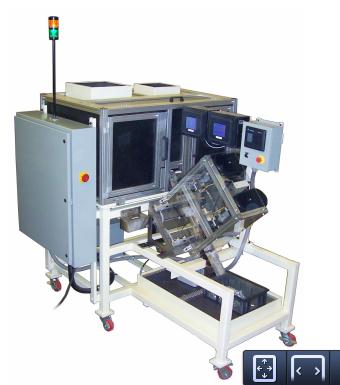 Small hinge components are die cast out of a zinc alloy material at high volumes. There are left and right hand sets, each consisting of a male and female side.

Out of these 4 individual pieces very little geometry is common except the pitch between their 2 existing blind holes. Each hole is to be tapped with either a #6-32 or M4-.70 thread.

The rate required was 800 to 1000 parts per hour with minimal change over between the 8 various combinations.

The design began with 2 sets of vibratory bowl feeders with hoppers, all mounted to a common base plate.

One hopper and bowl feeds the female hinge pieces and the other feeds the male hinge pieces. This plate sits flat on the table top and is outfitted with a series of air holes tied to a single manual valve. When the valve is opened the feeder plate moves by hand on an air cushion, guided by rollers between two fixed positions and is pinned into place.

Each position lines the selected feeder up to a single track with adjustable guides for each component. Hinge pieces are stopped at a feed separator which releases one at a time. Each piece stops at the first station where the first hole is form tapped by the timed tapping unit mounted above.

It is then released to a second station where the second hole is tapped. Coolant flows over the holes and into a large return pan, extending the life of the taps. After the piece is released from the second station it slides to a discharge chute which can direct the piece to a ‘good parts’ or ‘bad parts’ bin depending on the success of the operation.

The tapping units are equipped with tap monitors which supply data to the PLC. A variety of faults are programmed to catch any inconsistencies or failures. A touch screen and tall status lights make for easy operator interface.

After a lengthy runoff, this automatic tapping machine passed the customer’s stringent qualifications and was set into production. The increasing production demands have been met and consistency is better than ever.