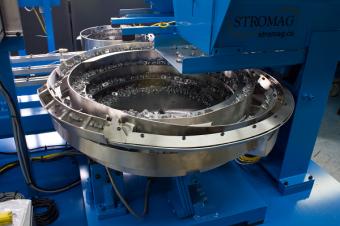 This Tier One Parts supplier was frustrated by an inability to make the economics work to purchase vibratory feeder bowl systems, integrate them with robots and automate relatively short production runs thinking the feeder bowl systems were not cost effective to replace each time.

Vibratory feeder bowl systems by STROMAG with interchangeable and standardization capabilities became the solution.  The STROMAG design team working closely with shop floor personnel and the customer's team came up with a standardized "infrastructure" with interchangeable key components and tooling such that multiple and varied parts can be changed from line to line in less than 45 minutes!!

The payback period for automating several smaller production runs now works.  Several of these feeder vibratory bowl systems have been shipped in 2014 and, more importantly, the jigs and fixtures to permit the fabrication of future systems by the STROMAG team are now in place.