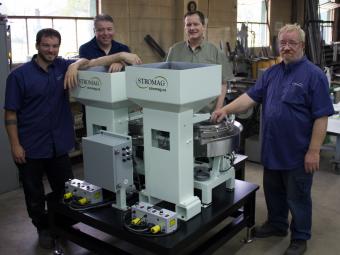 We were pleased to gain this opportunity after having been specified as the vibratory feeder bowl company of choice by the end user company, another Ohio based manufacturer of a wide variety of fittings.

The challenge of this group of vibratory feed systems was the multitude and variety of parts required to be fed by each system.   Ease of interchangeability despite the complexity of the parts was critical to ensuring the systems would perform effectively in the field once in the hands of the end user.

The experienced skilled artisans at vibratory feeder bowls by STROMAG were tested but met the challenge successfully once again.   Want to know what they look like, here’s a picture of the key guys on this project.

Vibratory feed systems by STROMAG, part of the North American automation industry since 1975.